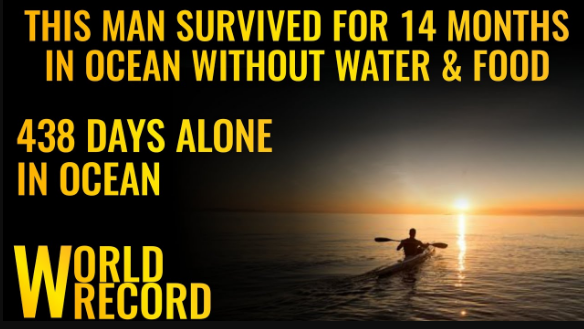 Story of Salvador Alvarenga, How This Man Survived For 14 Months In Ocean.

José Salvador Alvarenga was a fisherman from Mexico and This Man survived for 438 Days in the sea.

Best Example Of Never Give Up |Motivational Inspirational Speech.

The story of José Salvador Alvarenga is the best example of Never Give Up. He Believed in him that’s why he will be able to survive for 438 days alone in the ocean And He Created the world record.

what would it like to be, if you are left on a small boat in the middle of the sea for 14 months and the control of that boat is not in your hands?

And you have not been able to contact the outside world and can not see any human for 14 months, cannot see the roof above your head nor sample land to sleep, no food to eat and no water to drink.

then how can you survive the blue sea full of storms, it just makes the heroine imagine how someone will be able to serve in such odd circumstances.

But in this video, we will talk about a person who was unknowingly lost in the pacific ocean.

So Lets Start With The Story Of José Salvador Alvarenga

Do you know that if all the land on earth is combined then the Pacific ocean becomes 3 times bigger than that of the land?

If someone lost in this ocean then there is very little chance that it can be found.

José Salvador Alvarenga was a fisherman from Mexico.

He was catching fish from the pacific ocean and living with his family.

It was only 7 meters long. There was no roof over it nor any room in it.

There was a small icebox in the boat in which they had to kept fish.

Both those fishermen already knew that there was going to be a Storm in the sea but in the greed to earn more money by catching fish, they take risks and moves to 130 kilometers away from the land to the pacific ocean.

At 1 o’clock in the night, those people came in the grip of the storm.

Due to the storm, they cut the nets which were caught for fishing and left them in the sea and they started to push the boat towards the shore.

For 6 hours, they Continuously drove the boat to the shore, And they could see the peaks of the mountains present on this ground.

But then the motor of the boat broke, but the radio in the boat was still working.

And with the help of the radio, they shared their location with their boss.

He said that he was coming to pick them up but their radio battery also went down and their radio was also turned off.

Think how frustrated those people must have been at that time, That they cannot take the boat anywhere and they also lost contact with the outside world.

The ground was near and they could see the mountains standing in the shore, but the wind blowing in the opposite direction made him drift away from his shore.

And the mountains visible on the shore slowly started disappearing. And their boat started moving towards the deep sea. His boss sent the search team to find them and he tried to find them both for 4 days but he was nowhere to be found. Admitting defeat, his boss stopped looking for him.

In 5 days, the wind brought them 450 kilometers away from the shore. There was only a blue sea in all four directions in front of them and their boat was very small in such a big sea which it was not possible to find it from the sky.

They had neither a flare gun nor a device through which they could send the sky and ask for help.

In such a situation, their food was fishes, turtles and they found plastic bottles floating in the sea, they collected them and whenever it rained he would collect that rainwater in that bottle.

But if it does not rain, then most time they drink the blood of turtles or by drinking their own urine they Used to quench their thirst.

Think, how they must have felt at that time, that days they passing daily and both of them are on a small boat.

They spend their time catching fish, talking to each other, by crying, by laughing, and missing their family, and hoping that maybe he might find someone.

4 months passed but no one has discovered them yet. After 4 months, Alvarenga’s friend gave up hope of living. And because of this he also stopped drinking and eating food. And his body became weaker and he became so weak that his life ended.

Think about what happened at that time on Alvarenga. His only friend had also left him. And now Alvarenga was alone in the Pacific Ocean. 4 days after the death of his friend, Alvarenga also made a wish to gave up his life.

But his faith was not allowing him to do so. But then Alvarenga tried to fight with life. And to keep himself alive in some way, And at this time Alvarenga was at the center of the Pacific Ocean and ships used to come to that area at some time.

About 8 months later a cargo ship passed by. Alvarenga also made gestures by standing up but Ship went straight away and nobody noticed the Alvarenga. Think about how the time has been for Alvarenga. That the time for which he had been waiting for months came but nothing happened and he was left alone in the sea.

It has been a frustrating time for him, In 11 months he had traveled 8000 kilometers on his small boat and in this journey, he faced the harsh sunshine and storms.

On 30 January 2014, he saw coconuts floating in the water and birds flying in the sky.
Alvarenga understood that the land was nearby and he found an island.

Alvarenga jumped from the boat and reached the island.
After staying in water for 438 days, he got the privilege of living on land.

He saw a house on that island and knocked on the door of that house.

This moment was one of the most beautiful moments for Alvarenga.
In which Alvarenga met a person after so many months.

That island was in the middle of the sea if he would have missed that island too.
Then after 5000 km, he would get the land-only and it would take another 240 days to reach there.

Later Alvarenga came to his house and wrote his book on this journey.

Unknowingly, Alvarenga made a record of spending 438 days in the sea and nobody wants to break this record.

We learn a lot from this story of Alvarenga. That we should never give up hope. No matter how far the destination is. but by slowly taking steps one day it will found. If that friend of Alvarenga had not given up hope, he probably would have been alive today.